Solar power technology is under constant development, new types of solar panels are researched and produced in order to achieve the most efficient technology. With the advancement of technology, the sector of renewable energy has seen a major increase in activity.

Recent breakthrough in the field includes the production of solar panels, which are composed of a class of materials called perovskites, which promise to deliver cheaper and efficient solar panels.

Based on the perovskite research, results show that using these materials has been able to boost their efficiencies regarding the percentage of available sunlight that they convert to electricity. This is accomplished more rapidly than any other solar cell material that has been mass produced or which is being developed in labs.

In the years that these resources have been analysed their efficiency figures increased from approximately 10 percent to 20 percent in just two years.

Different compounds have been created using the mineral, one of importance contains methyl ammonium, lead, iodine and chlorine and can absorb a greater spectrum of sunlight than silicon. The material that makes up over 80 percent of the solar cells on the market today. 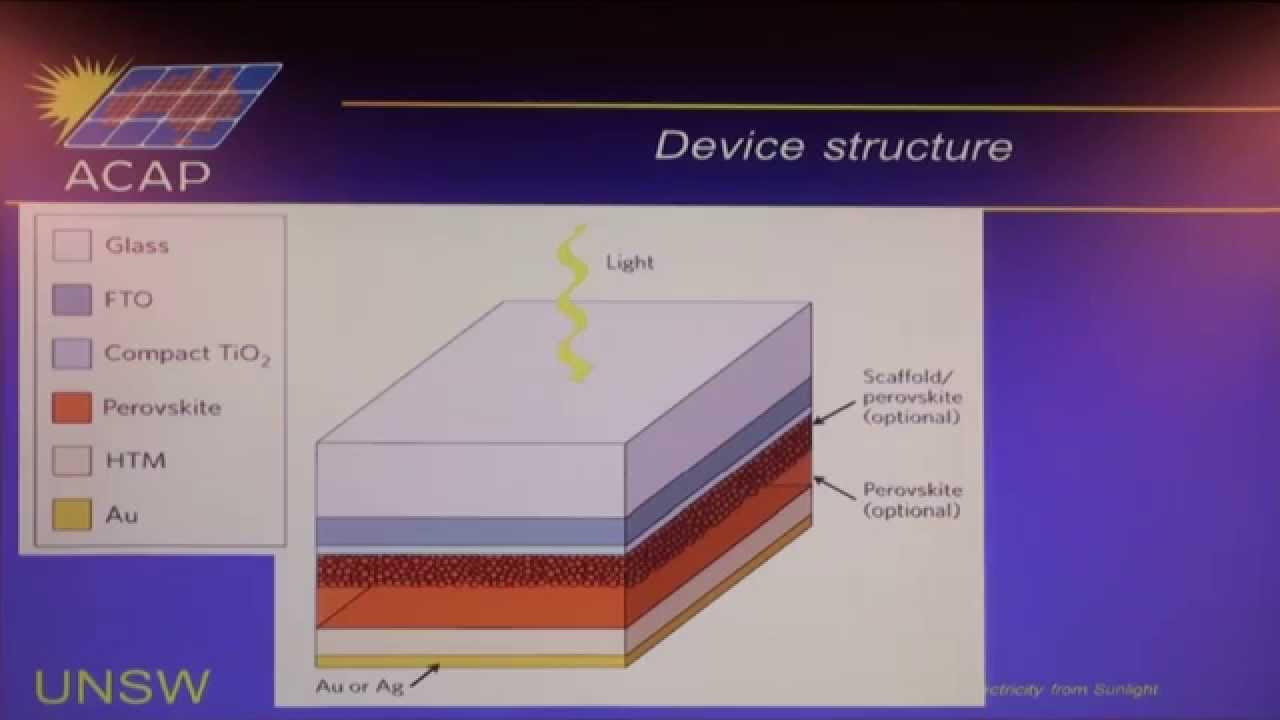 Up until now, no perovskite cells have made their market debut, but several companies are in a race to make that transpire in the next few years.

The best lab cell efficiency in the present has reached 20%, however making these cells as efficient in mass production will require more years, due to the fact that making a bigger number of cells with consistent quality is more difficult than manufacturing a small quantity in the lab. It is predicted that the emergence of mass production of perovskite solar cells will be in the next couple of years, with the focus set on 2017.

Another impediment, which slows the process regardless of the degree of technology innovation is the aspect of scaling up production, which involves designing different pieces of equipment that work together, as well as promptly troubleshooting any production problems that may arise in the process.

One aspect to consider is the emergence of competition between the perovskite solar cell developers, who will have to compete in price and efficiency of their products. More so than this, they must prove that their cells can last as long as the presently commercialised silicon cells, which are expected to still produce 80% of what they could generate optimally after 25 years. Such obstacles require time to overcome, especially since the silicon technology is relatively new itself and not fully accepted in all areas of the world.

Another major challenge in commercialising perovskite solar cells is protecting the cells from moisture, a factor that can significantly lower their performance. This can prove critical to markets such as the UK, where the climate may presently be considered unsuitable for such solar cells.

There are many advantages of solar energy, and one advantage of perovskite in particular, is that it can be made of common metals and industrial chemicals, as opposed to the expensive raw materials used in other silicon substitutes.

Perovskite-based materials could also be used to print photovoltaic electronics directly onto glass or other materials, which would be cheaper than more-complex methods for producing thin-film solar cells. As a hybrid material, as well as boasting good efficiencies, perovskites can also take advantage of organic solar materials' capacity to be applied as a liquid solution.

Spraying the perovskite as a liquid coating onto a substrate material allows solar cells to be manufactured at high volumes and at a much lower cost than the currently used silicon solar cells.

The structure of the perovskites cells enables them to have high charge-carrier motilities and long diffusion lengths, allowing the photo-generated electrons to travel long distances without energy loss.

As a result, the electrons can travel through thicker solar cells, which absorb more light and therefore generate more electricity than thin ones.

Alternating the compound composition, allows the solar cell colour to be adjusted to any colour that is desired. This gives the cells the huge advantage of being able to be fabricated in aesthetically-pleasing ways, which may result in consumers willing to put them on their roofs as building-integrated photovoltaic applications become more attractive.

Furthermore, they can even be processed as additional layers on top of silicon panels, where the colour modification can be used to improve the current state of the art panels.

Building a perovskite solar system module capable of surviving for decades outdoors is currently still in its R&D phase, but what is for certain is that the potential of perovskite solar cells is huge, and if the material’s promise can be realised it could completely revolutionise the capabilities of solar energy.